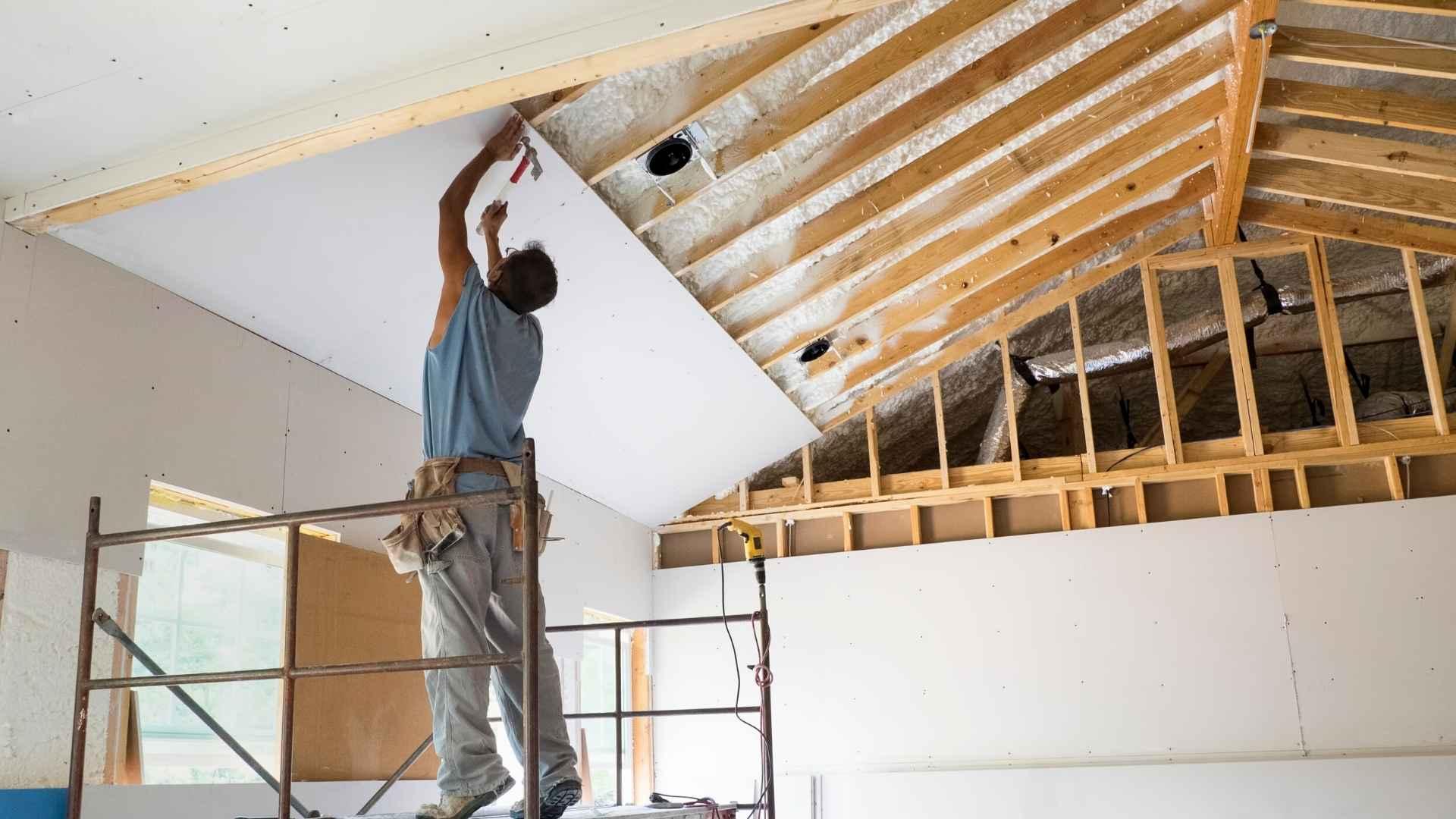 How to solve the problem of water damaged ceilings?

Water damage is one of the most general ceiling problems in Australia. Although the signs of a ceiling leak are usually easy to spot, it is often much more challenging to find and fix the cause.

Common causes of ceiling water damage include leaking or burst pipes, an overflowing toilet or bathtub, and leaking roofs.
However, any water source that seeps up to the ceiling will eventually cause damage.
For example, small ceiling leaks can cause yellowish-brown stains and lead to mould.
Larger leaks and burst pipes will cause the ceiling to collapse completely.

The average cost of repairing a water-damaged ceiling in most cities in Australia is estimated at AU$2,164. Therefore, it is preferable to ask for professional help.

From causes to fixing ceiling water damage, this guide explains everything you need to know if your ceiling has a water damage issue.

What are the causes of ceiling water leaks?

Either plumbing problems or roof leaks usually cause ceiling water leaks. Most water damage in the ceiling is the result of slow leaks that cause yellowish-brown water stains.
However, a large leak or damage to the roof during a storm can make water run through the ceiling in a matter of minutes.

Isn’t it one of the scariest things that you flush a toilet and water comes up instead of going down?

Plumbing problems are the cause of most ceiling leaks. The sealant in the bathroom wears out over time, allowing water to seep into the walls and drip onto the ceiling. Also, pipes can sweat in the summer or winter. Although less likely, pipes and pipe joints can leak over time. In rare cases, pipes can burst, or appliances can leak. If the water damage is directly under a bathroom or kitchen ceiling, a leak in the water line could be the problem.

Most roof leaks are due to damaged tiles that allow rain to enter your home. Although you may think these leaks only occur in the spring and summer, they are just as common in the winter.

In Queensland many homes end up with storm damage either from falling branches, heavy winds dislodging a roof section or hail damage to the roof.
We have done extensive insurance work in regions of Brisbane that were hit by massive hail storms in 2020

What are the signs of water damaged ceiling?

Fortunately, most signs of leaking ceilings are easy to spot. If you perceive any of the signs mentioned below, you should immediately find and fix the water leak.
After you have repaired the leak, you still need to fix the ceiling water damage.

Water leaks from the ceiling

It would be great if you always consider water leaking from the ceiling as a major problem. In most cases, you can easily find the cause of the leak. Check the plumbing above the damage for leaks or overflows. If the roof is directly above the ceiling, look for damaged shingles.

A sagging ceiling is also an indication of a ceiling leak. As the water saturates the ceiling material, it also weakens it. The weight of the water then causes the ceiling to begin to bow. Although this is most common with suspended tile ceilings, water can also cause plasterboard and gypsum ceilings to sag. Usually, a sagging ceiling indicates there is a problem and it will have to be replaced if it is an extensive area that is sagging.

Another sign of a ceiling leak is peeling paint or plaster. This is most common with small leaks where the ceiling has been wet for a long time. Over time, the water causes the paint to blister or peel.

Small ceiling leaks often show up as yellowish-brown water stains. The water stains usually mean that the leak is small enough to allow the area to dry with time. Rings form with repeated or inconsistent leaks as the water spreads farther and farther from the source over time. Even if they feel dry, water spots mean there’s a leak somewhere.

How to repair water damage in your ceiling?

If you have a leak in your ceiling, but the damage is minor, you may be able to dry it out. Of course, the water source will still need to be repaired, but this can save you time and money.

However, you will also need to repair the ceiling if water leaks through it or results in more extensive damage.

1. find and repair the leak

First, you need to find and fix the source of water. If you repair the water damage to the ceiling without closing the leak, it will only lead to problems in the future. Besides, the longer you wait to fix the problem, the worse the damage will only get. You will probably need a plumber to come an inspect where the water is coming from. Sometimes it can be a straightforward task. Other times trying to pinpoint where the water is originally entering from can be difficult.

Next, you need to dry the wet ceiling as soon as possible. This will limit the damage and prevent mould. Ordinary fans will work, but it may take days or even weeks for the ceiling to dry.

Instead, use high-efficiency fans and a structural dehumidifier to shorten drying time. You can purchase these from most equipment rental companies.

With the right equipment, it will take anywhere from six hours to a full day to dry a water-damaged ceiling. However, don’t rely on your eyes or sense of touch to determine if it is truly dry. Instead, you should always use a moisture meter to ensure it is dry.

For minor water damage to the ceiling, you can usually repair it without replacing the drywall or plaster. First, scrub the ceiling with a brush to remove loose dirt. Then wipe it down with a clean, damp cloth and let it air dry.

You can touch up small gaps and cracks with plaster or drywall filler. For gaps less than half an inch wide, use a putty to fill the gap and leave a smooth surface. For larger gaps, fill them first and then sand them smooth.

For major damage, you will need to cut away portions of the ceiling. For plasterboard ceilings, use a box cutter or drywall saw to make straight cuts.

Then cut a new piece of drywall slightly smaller than the hole and screw it into the joists. Seal the joints with mud and tape to seal the joints and make your ceiling smooth.

If you have plaster, you will need to replace the backing material. Then apply the plaster in thin layers, letting it dry each time. Continue applying layers until the new section matches the existing structure.

Can you apply paint over a ceiling damaged by water?

Yes, you can. Once you observe the plaster is dry, you can paint the damaged area with a sealing primer. This will not only cover water stains and seams but also prevent the ceiling from soaking up paint. Without a primer, the ceiling will need many more coats of paint.

You can start with at least two coats of primer before applying the top coat. For smaller sections, you can work the top coat into the old paint. However, for larger sections, it is easier to paint the entire ceiling. If you are requiring your ceilings to be painted after they have been replaced – we have a team of professional painters on hand

Who should I call about water damage to the ceiling?

If you have water damage and are looking for a painting contractor to repaint or repair your wall or ceiling, Qld Interior Lining is here to provide you service in different cities of Australia. We serve the Sunshine Coast, the Gold Coast and Brisbane.

This article was qriginally posted on November 16, 2021 on Queensland Interior Linings